In his article Curtis makes a strong claim for mistrusting any photography intended to promote social reform. This impression is enforced by the nature of the essay, in that his intention is to highlight occasions where the photographer has modified the scene to invoke a specific interpretation. As Curtis points out, deliberately altering a scene to improve the photograph was not new at the time, and had been used since the beginnings of photography. Matthew Brady in the American Civil War and Roger Fenton in the Crimean War were both known to manipulate the scene in order to improve the photograph. Is this modification exploiting the subject? Of course it is, but there is a case for distinguishing between levels of exploitation.

In the case of the Arthur Rothstein image “Negroes, descendants of former slaves of the Pettway Plantation, Gees Bend, Alabama, 1937”, Curtis explores how Rothstein captioned the photograph in a way that added a negative connotation to the image. 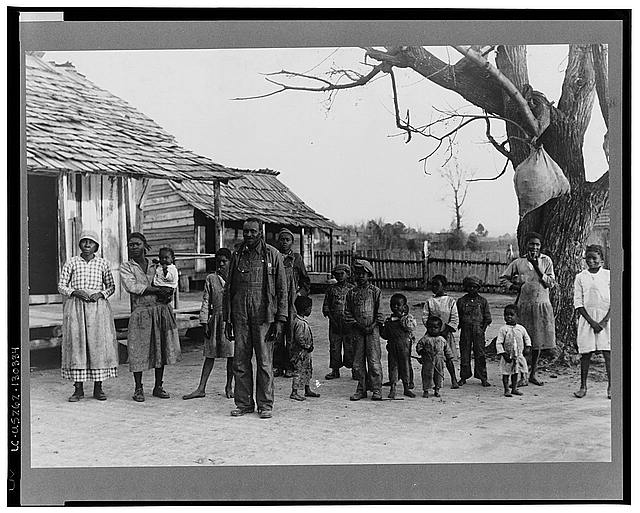 But as Curtis says, a truer interpretation could have been given at the time by a better caption. This doesn’t make the photograph itself untrue, rather that an untrue interpretation is being encouraged.

In looking at Walker Evans photograph ‘Vicksburg Negroes and shop front, Mississippi’, Curtis claims that examination of other photographs taken at the same time shows different arrangements of the same men, including one where a white man has moved into the scene. 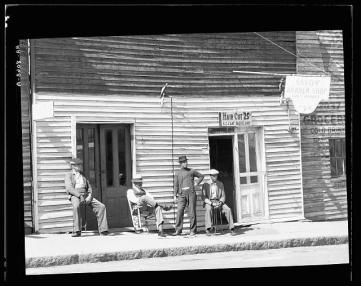 Curtis then says that this image can be interpreted differently depending on whether one believes the white man to be an actual local, or is in fact Evans’ driver drafted into the scene. In his words, the man “may have been Evans’ driver” (Curtis,2003:11). The word ‘may’ here suggests there is no evidence for this claim, or at least that Curtis has no evidence. This claim becomes problematic; it is quite easy to question a photograph’s integrity if we permit all possible explanations.

Given the overall aim of the FSA – to promote the government welfare reforms – it is arguable that modifications were essentially benign and well-intentioned. But the whole premise of the FSA means they were never going to be objective anyway. From this distance and time it is hard to know how much these photographs, when published in newspapers and magazines, were not examined forensically as they since have been.

Cropping photographs is a necessary part of newspaper publishing; sometimes the image has to be cropped to fit the page. Since the FSA photographs were largely intended for newspaper and magazine publication, cropping of images by editors would be a fact of life, and mostly out of the control of the photographer. Harold Evans explains how cropping can cause problems with interpretation and provides some examples (Evans,1978:226-227) 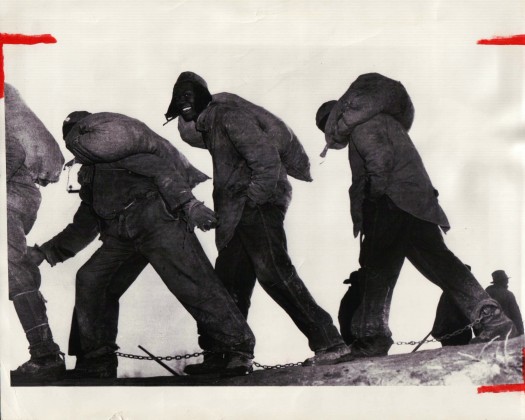 This image from 1937 was cropped for publication so that it removed the leg irons. In the context of the story – prisoners helping with flood relief – this made for a very different interpretation.

In our current age of false truths and fake news we are used to the idea of doctored images. Photoshop and other editing tools have image alteration within reach of most people. We are even less likely to look for objective truth in photographs now than at any time in the past. A cynical view is that the most truthful and objective photograph is the one where the photographer has been best at hiding his alterations.