In his article John Mraz criticizes Salgado’s book ‘Other Americas’ for an unnecessary focus on poverty and despair in his subjects. He suggest that this focus may be less to do with Salgado ignoring political and economic reasons for this perception than an attempt to emulate Robert Frank’s book ‘The Americans’.
Mraz also says that Salgado’s view of Latin America is a deliberate attempt to pander to a Western paternalistic view of the third world in general, as a place where life carries on under a fatalistic view of the world. An existence that accepts things as being just the way they are because that is how they are meant to be.

Mraz provides examples of images in ‘Other Americas’ to support his claim.

For this image Mraz asks “An Ecuadorian couple hold a furry white puppy and a tiny bird in their arms; the beclouded mountains behind form a backdrop: what makes them appear so anguished, so
distressed, so exhausted?” (Mraz,2002).

Mraz points out that the book has no supporting text for each image, meaning that each will be interpreted solely on the basis of what can be read from the image itself.

He says that Salgado “is obsessed with death”(Mraz,2002), and that without any accompanying text there is no context behind the images. 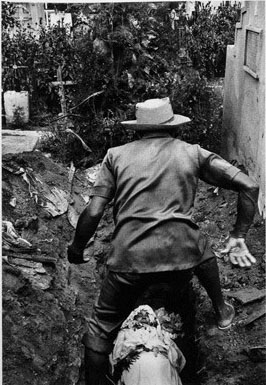 Mraz describes this image of a Brazilian man standing over a woman’s body in a grave as grotesque. His point is that it is likely that there was a story behind this scene that provided a more prosaic explanation why there is no coffin. Poverty does not arise out of any natural order to the world; there will be external factors behind this scene.

Mraz compares Salgado’s images with those of other Latin American photographers such as Nacho López, Manuel Alvarez Bravo, and the Hermanos Mayo. He makes the point that the sadness and despair evinced by Salgado’s images contrasts strongly with the humour and affirmation of life that is shown in these other photographers’ work. Mary Warner Marien says of Nacho López that “his photo-essays present the poor as animated, capable actors in their own realm, not as victims awaiting misfortune’s next call”(Marien,2014:319).

Mraz mentions an image of a man being measured in front of a coffin shop . 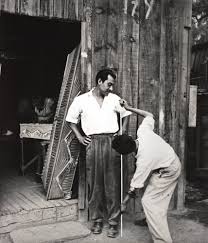 Mraz says in relation to this image “if death is not necessarily to be celebrated, you can at least laugh in its face”(Mraz,2002).

An earlier photographer, Manuel Alvarez Bravo, provides Mraz with another example of how humour in the face of death is very much part of Mexican culture; “droll commentary” as Mraz puts it. 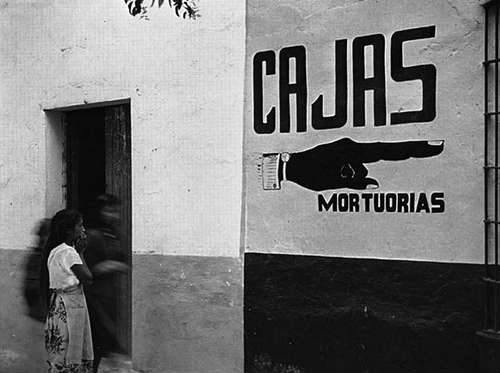 Marien says of Alvarez Bravo that although influenced to a degree with Modernism and also by his friendship with Cartier-Bresson, he was more concerned with depicting Mexican art and life than with any western photographic traditions.

Mraz then goes on to discuss how Salgado addressed some of his (Mraz’s) perceived shortcomings in ‘Other Americas’ in his later book ‘Terra’. In this Salgado juxtaposes images from ‘Other Americas’ with newer photographs that explore the economic necessities that force people into desperate measures to escape poverty. But this juxtaposition is only made explicit by the inclusion of extensive captions to contextualise the images, to explain the reasons why the scenes depicted have arisen. He says of ‘Other Americas’ that the absence of text meant that a reading of the book in total relied solely on the cumulative effects of the images themselves. The extensive use of death and misery in the photographs means that becomes the main interpretation of the set – “mystery, anguish and estrangement were the sensations they evoked.”(Mraz,2002). In contrast Mraz says of ‘Terra’ that Salgado “provided a historical context for understanding the source of these maladies, and created a narrative that moves from past oppression to present struggle”(Mraz,2002).