Jacob Riis and Lewis Hine
In the early 20th century Jacob Riis and later Lewis Hine both produced their socially concerned work as outsiders; neither was originally from the environment that they documented. Both were primarily concerned with social reform and their photographic careers were almost exclusively in the documentary field.
Riis, a Danish immigrant to the USA, was a police reporter for the New York Tribune who intended his often brutally shocking images to drum up support for social reform. He toured slum areas of New York at night and many of his photographs were taken with magnesium flash to ensure spontaneity (although several were actually staged). 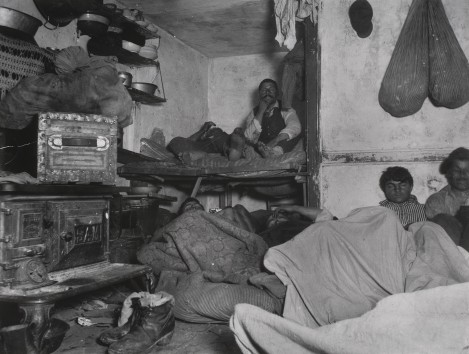 His photographs became respected for their perceived objectivity as they looked like snapshots, attracting credibility because they were not obviously staged ‘art’ images’. His audiences were mainly the middle classes who would usually not dare to venture into the depicted slum areas themselves.
Lewis Hine began his photographic career when a teacher at a Humanist school in New York. He learned about photography while at the school and began by photographing immigrants arriving at Ellis Island. He intended these as a way of encouraging his students to regard new arrivals with the same dignity and compassion that they would for the original pilgrims to America. He then began work campaigning for child labour reform, photographing children at work. 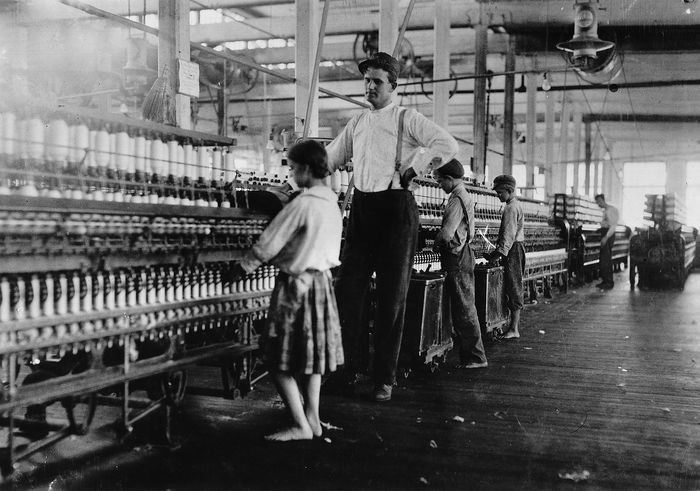 Compared with Riis, Hine’s work is seen as showing a more objective approach, as his photographic career coincided with the emergence of social work as a discrete discipline.

Bill Brandt
Bill Brandt worked primarily in the UK, and also produced documentary photography as an outsider; like Jacob Riis he was an immigrant to the country where he made most of his work. Unlike Riis and Hine, he had a photographic background before he began his photographic career in England. He had been exposed to surrealist ideas while in Paris, and used this in some of his work. He was not a social reformer in the same way as Riis and Hine, but photographed more as an interested observer rather than a campaigner. Much of his work is more obviously influenced by art movements than Riis and Hine, and several of his photographs (such as ‘Alley off East India Dock Road’ from 1938) seem influenced by German expressionism of the 1920s as well as surrealism. Post-war he largely abandoned documentary photography in favour of landscape, and became as well known for his landscape photographs as his earlier work.

Exit
The Exit Photographic Group was formed largely through a shared social concern. Their ethos became much more about embedding within the communities they depicted, so that their work tried as much as possible to show the environments that they photographed from the point of view of those who lived there. They did not attempt to provide an objective viewpoint as that was never their intention. Chris Steele-Perkins in an article for Photoworks describes their shared position as “that inner-city poverty was endemic and for an advanced industrial society, intolerable”. Their publication ‘Survival Strategies’ was a combination of photographs and interviews, with the intention that both images and text had equal prominence, not just captions to support the images. Unlike Riis, and to a certain extent Hine, they were careful to assign dignity to their subjects, to show as much as possible that the inhabitants were not just to be pitied. 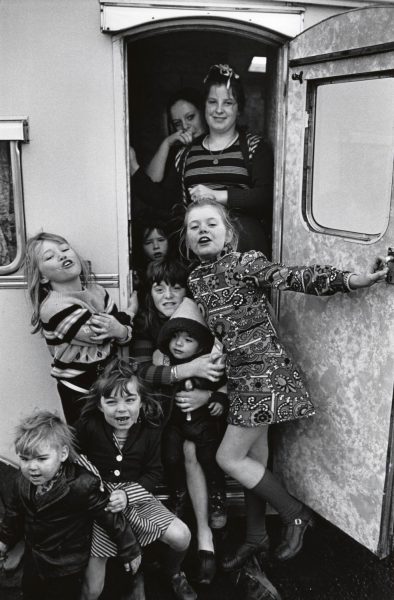 However this depiction did not detract from the group’s collective outrage that such poverty should still exist in a civilized society. Of the three primary members of Exit, two – Chris Steele-Perkins and Paul Trevor – have moved away from pure social concern into other photographic areas. Nicholas Battye moved away from photography altogether in favour of psychoanalysis.

Chris Killip
Chris Killip provides an example of a move away from photography created specifically to promote social change, towards a more personal interpretation of poverty and deprivation. His images are less about overt protest so much as a general view of economic decline.

Like many other socially concerned photographers he is an outsider, originally from the Isle of Man, beginning his photography career as a beach photographer. His work is created as an insider, and like Exit he embeds himself in communities to allow a more personal connection to his subjects, but at the same time applying an introspective and objective viewpoint. In this sense he perhaps has more in common with Bill Brandt than Riis and Hine.

Nick Danziger
Nick Danziger’s work is much less about concern for social reform than the others mentioned here. His work will often refer to class distinctions and often uses images of important people in unguarded moments. In combination with images of ordinary people the effect does not some much highlight differences as accentuate commonalities between classes. This focus on class as a subject is highly reminiscent of Bill Brandt.

There is often a sly humour in his images as well, not dissimilar at times to the colour images of Martin Parr