“the simultaneous recognition, in a fraction of a second, of the significance of an event as well as of a precise organization of forms which gave that event its proper expression” (Warner,2014:256)

“one unique picture whose composition possesses such vigour and richness, and whose content so radiates outward from it, that this single picture is a whole story in itself”(Bate,2016:69)

Although both descriptions are related, they don’t really mean the same thing. The first describes an instant, a point in time where freezing the action at that precise point epitomises everything else involved in the scene. The second quote expands the scope to provide a whole narrative that is encapsulated in the image; there is an unseen past and future in the scene that is described completely within the photograph. These two statements are by no means contradictory but do give a different emphasis to the whole idea.

Two of Cartier-Bresson’s photographs provide examples of the different emphasis he is describing in these quotes. One of his most famous photographs, “Behind the Gare St.Lazare” is a perfect illustration of the first quote mentioned above. 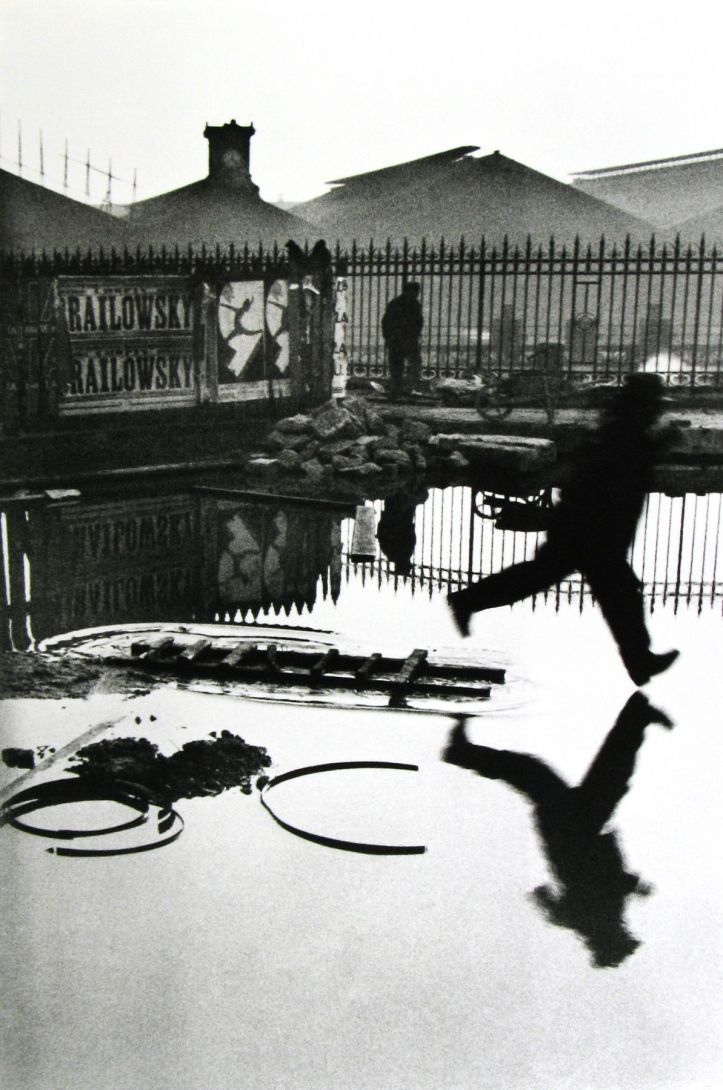 This perfectly captures a frozen moment in time where the man’s movement is mirrored in the puddle, but is also reflected in the poster in the background. Of course the picture does allow the viewer to provide a narrative to the image. It brings up questions such as where is the man going to in such a hurry, or what will the eventual splash look like when his foot lands. In that sense it does also to a certain extent illustrate the second quote, in that the picture does have a story to tell.
Another photograph, “On the banks of the Marne”, more fully illustrates the second quote.

This photograph is less dramatic than “Behind the Gare St.Lazare”, and although still conforms to Cartier-Bresson’s idea of ‘a precise organization of forms’, is much better described by his idea of a single picture as a story in itself. Ian Jeffrey describes an interpretation of the image when he says “In their settled gravity they embody contentment and represent the French as comfortable gourmands. Equally they are distinct characters, capable of their own particular appraisals of the day and its pleasures”(Jeffrey,1981:191-192). Jeffrey’s description here provides a perfect example of how an image – this image – can trigger an entire narrative from a single image.

Paul Edwards describes how Cartier-Bresson was much less interested in the printing and post-production aspects of photography. He says of Cartier-Bresson “For him, all the work is achieved when the shutter is pressed because printing did not interest him”(Edwards,2012:69). It seems quite likely that the kind of narrative that Jeffrey applies to ‘On the backs of the Marne’ is not one that Cartier-Bresson himself would have applied. He may have provided the second quote above but others have interpreted this in their own way since.